Whether she's out for dinner or checking out at the grocery store, Phoebe Robinson says it can be hard to avoid stereotypes about race and food.

"I can’t put that [watermelon juice] in my cart because everyone…will think that’s what black people do," the comedian, writer, and actor says. "We all learn [not to eat fried chicken and watermelon] -- it’s like there’s a little pamphlet of things you can’t do [when you're black]."

Phoebe even avoids eating out in certain neighborhoods altogether.

"If it’s in an area that’s not particularly open to people of color, then I just won’t eat there," she says. "It’s a bummer because I’m sure I miss out on some good food, but I don’t want to be stared at."

This week on The Sporkful we hang out with Phoebe over lunch at one of her go-to places in Brooklyn and talk about her experiences with food and race and dating. 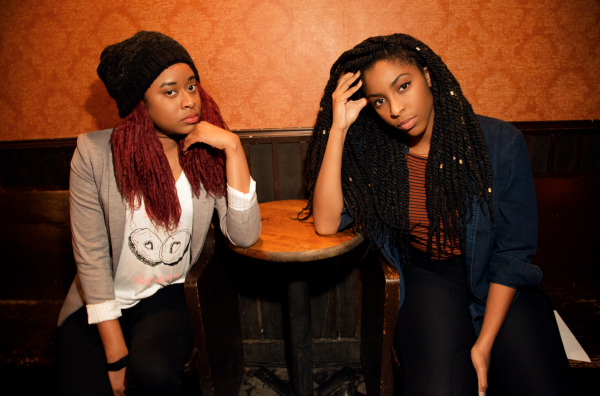 Race is a big part of Phoebe's stand-up comedy and the two podcasts she hosts here at WNYC Studios: 2 Dope Queens (with comic Jessica Williams, formerly of the Daily Show, above right) and Sooo Many White Guys.

But it's also something Phoebe (above left) confronted personally during her four-year relationship with her former boyfriend -- who's white.

She says sometimes it was tricky to find a restaurant where they were both comfortable -- but at least in restaurants nobody heckled them.

Listen in to the full episode to hear more about what it’s like to eat out when you’re in an interracial relationship.

Plus, Phoebe tells Dan how to share food on a first date without getting creepy, who should pay for the meal, and where she turns when she needs to stress eat.