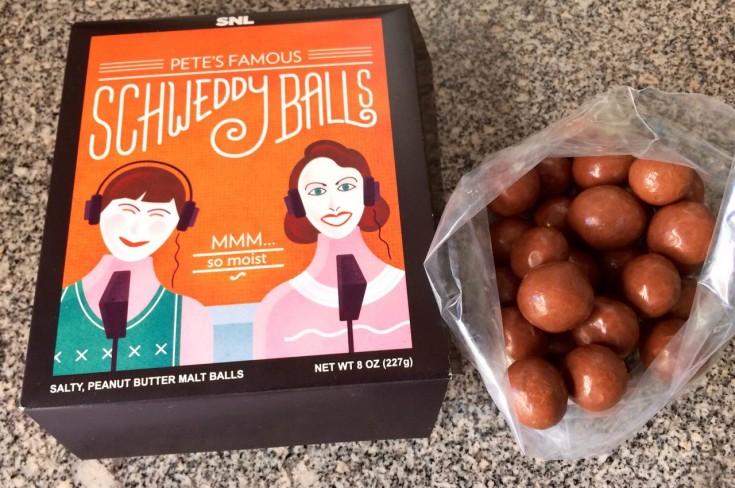 As of September 13, you'll have the chance to consume these comedic comestibles FOR REALS.

In honor of SNL's 40th anniversary, the show is teaming up with a chain called IT'SUGAR to make a dream you never knew you had come true. But how do they actually taste? I got some advance samples and found out.

Schweddy Balls was given the sweet treatment once before, when Ben & Jerry's put out Schweddy Balls Ice Cream a few years ago. It was quite tasty, though would leave a drippy, creamy splotch on your shirt if your weren't careful.

I opened the Pete's Famous Schweddy Balls, to find, as described on the package, salty peanut butter malt balls. That is, balls with a malt center, covered with chocolate that has a whiff of peanut to it, finished off with that thin wax layer presumably to prevent sticking/melting. I scraped gently with my teeth, removing the thin wax. Then, I licked and gently nibbled the chocolate away.

Truth be told, I was hoping for another layer to excavate. I've put a lot of balls in my mouth, and some have a thick, substantial peanut butter layer under the chocolate. Sigh. Nuts. It was a little disappointing. These are Schweddy Balls, though, and I'd probably pay for the packaging alone. 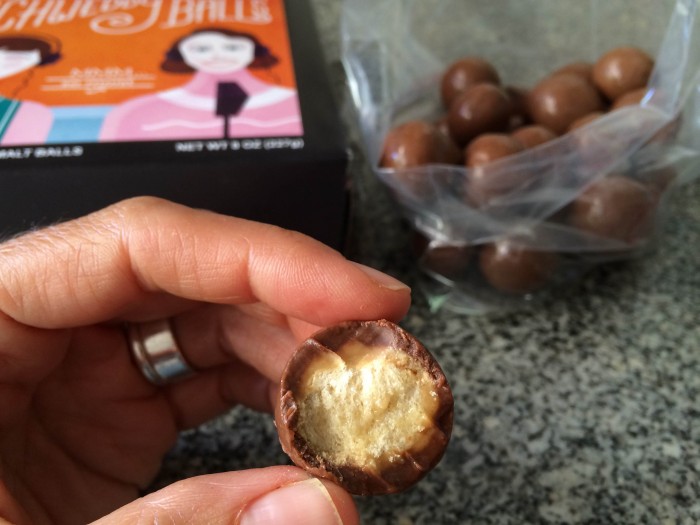 Next up was Colon Blow, The HIGH Fiber Cereal. The packaging for this one is a very satisfying replica of the box in the parody commercial from 1989 starring the great Phil Hartman:

The secret to enjoying Colon Blow, or any of these SNL anniversary treats, is to sit and enjoy them while watching the sketches that inspired them. You won't have to sit on the toilet, though, as this granola only has 6g of fiber per 1/3 cup. It's got some flax seeds, sure, but this cereal is all treat. Tons of semi-sweet chocolate chunks and oats stuck together with almonds, honey, brown sugar and cranberries makes for a tasty dessert... er, breakfast. A box of wood shavings would be funnier, but I suppose it wouldn't taste as good. 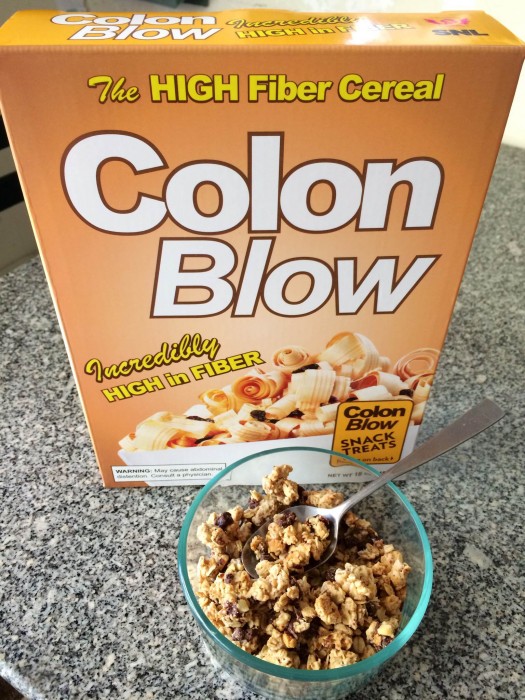 I was in the mood for something fruity, so next I tasted the Almost Pizza Pizza-ish Gummies and the Bass-O-Matic Gummy Bass. The pizza gummies were that opaque-variety gummy with a decent pizza-like design. The 2012 parody commercial, starring Kristen Wigg and Bill Hader features pizza that's not actually pizza. That's sort of the way I feel about these gummies. Yeah, they're... gummy. Sure, they're sweet. But they don't taste like anything. At all. Perfect! 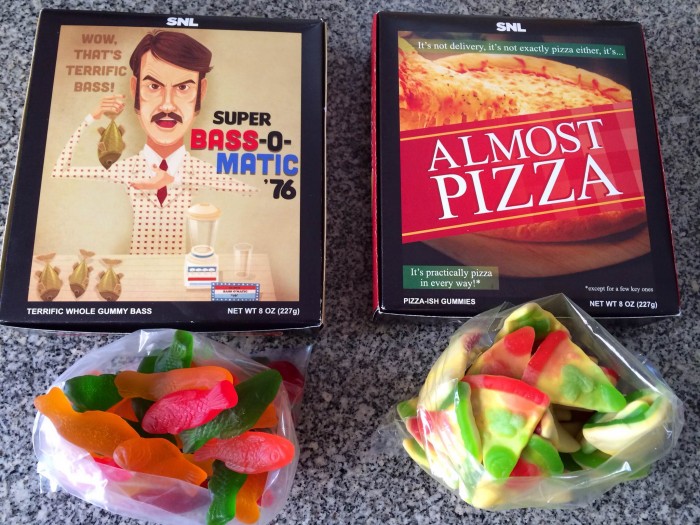 The Bass-O-Matic gummies, on the other hand, are delicious in the way that Swedish fish are. They are gummy but not sticky, the red tastes like genuine red, the orange tastes like genuine orange, the yellow tastes like genuine yellow, and the green tastes like... I have no idea. Do people actually eat the greens... of anything? The sketch is classic Dan Aykroyd from 1976, and though it's an integral element to any person's comedy education, I would NOT recommend eating candy or any other food while watching this particular sketch.

There are a bunch of chocolate bars and mint tins featuring popular SNL characters (The Coneheads, Drunk Uncle, Jane You Ignorant Slut, Debbie Downer) but I have to give a shout-out to the Stefon Dark Chocolate with Pop'n Rocks Bar. It's decent dark chocolate with Pop Rocks-like snappers embedded. This item, though small compared to the majesty of Colon Blow, takes top prize for taste. (Insert Stefon's typical reaction here.) 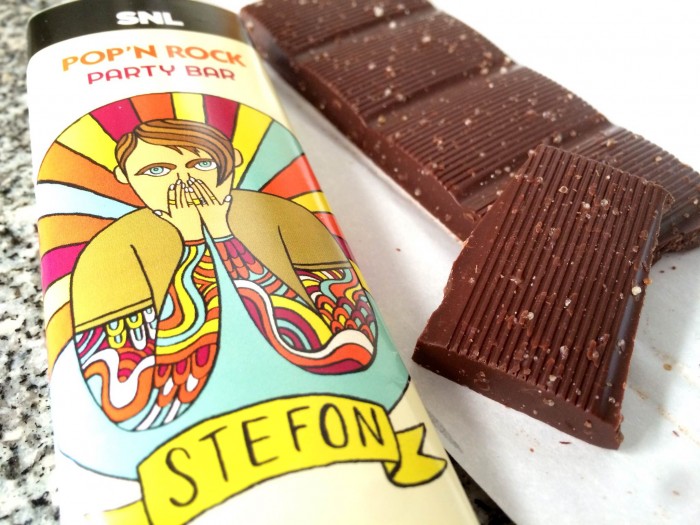 I would have liked to see some Church Lady Atomic Fire Balls, Ed Grimley Licorice Triangles, and Wayne's World Gummy Guitars. I'm also longing for a Samurai Delicatessen Candy Sword. (I don't know what sort of candy would even be appropriate for Appalachian ER). In any case, these treats lead us back to the archives to celebrate the genius that is Lorne Michaels. Happy 40th Saturday Night Live. Here's to 40 more. 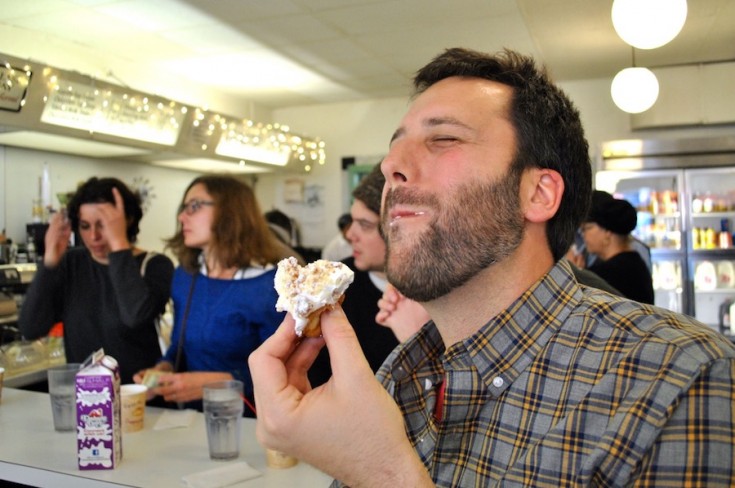 I often get emails from listeners traveling to New York who want restaurant recommendations. So now here they are, in one handy place! 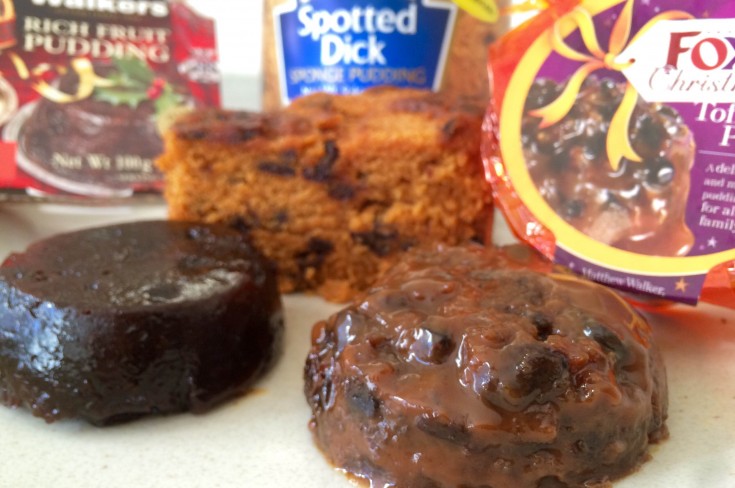 Tired of Chapstick and Lifesavers? Make over your Christmas stocking with some international treats brought to you by Professional Sweet Tooth, Julie Zwillich.

Julie Zwillich presents a post-Thanksgiving, pre-Holiday palette cleanser with a test of all treats choco-minty.