The Moist Towelette Museum Is A Thing 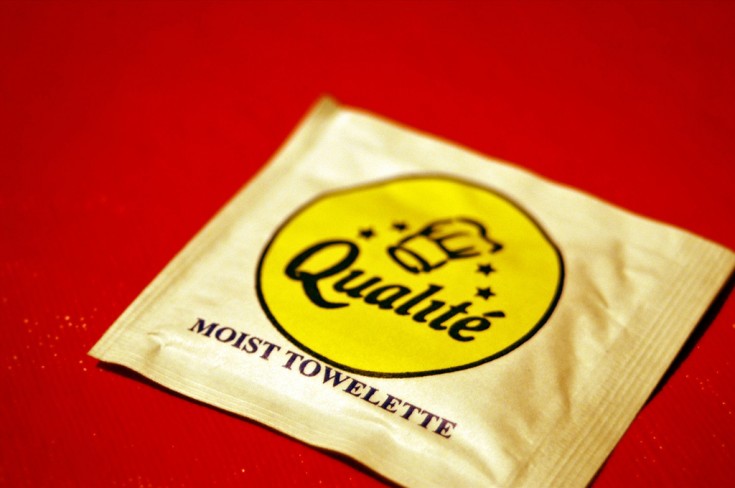 This week on The Sporkful, we're delving into hand sanitation. Because part of eating well is keeping your hands clean enough to avoid unintended cross-contamination of sauces or radical utensil slippage. And, well, it is flu season.

First up: we interview the founder and curator of the Moist Towelette Museum.

When John French (shown below) isn't running the digital star projector at Michigan State's Abrams Planetarium, he serves as curator of that museum's collection, which spans eight shelves in his office.

"We've got a wing of the museum here -- a shelf really -- that features some of the [towelettes] from different restaurants," he says. "I've got them for all kinds of different purposes. Like I have one here...that's called a Radiacwash, that says, 'to wipe away radioactive contamination.'" 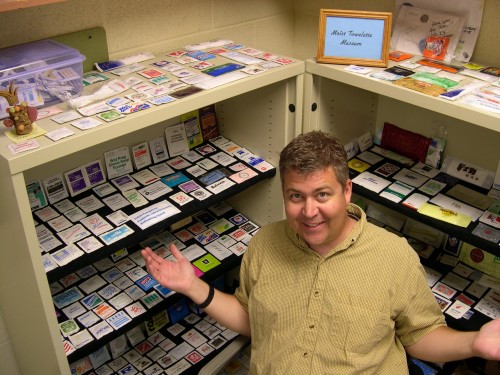 The towelettes in John's collection (see a few exhibits below) were designed for everything from cleaning musical instruments to dentures to the pinky fingers of secretaries. And they hail from every corner of the world. One from Asia even includes a set of chopsticks in the package. It's a wild and crazy world of moist towelettes, but John recommends a simple approach to deploying them:

"I like to have the kind that you can open up and it has that nice lemony scent, and I'll unfold it all the way," John says. "I try not to ball it up." But what about the world of unmoistened hand sanitation? I debate the ins and outs of napkins with my friend Mark Garrison in the second half of the show.

-Which is better, paper or cloth napkins?

-Should restaurants be banned from using scented hand soaps in their restrooms?

-And is tucking a napkin into your collar childish? More importantly, is it effective?

Speaking of hand sanitation, this seems like the perfect episode to revisit an idea I proposed in my book Eat More Better: a soapelier. I envision him as a proper gentleman wearing a tuxedo, wheeling a cart of soaps around the restaurant, recommending soap and food pairings to diners. "Lemon verbena soap with diet cola -- for the lady?"

It's a brave new world of hand sanitation this week on The Sporkful.